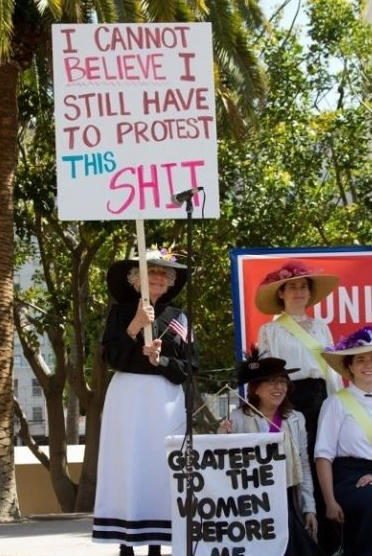 Today is Women’s Equality Day, the 93rd anniversary of the 19th Amendment granting women the vote,” according to Irin Carmon of MSNBC. However, Women are far from equal in today’s society. Granted, I am far better off then my grandmother or even my mother when it comes to these issues, but we still haven’t gone far enough. There’s the pay gap, the slut shaming, the beauty expectations, not to mention the double-duty of raising a family (of which I have not yet had the pleasure) while maintaining a career. The pay gap is real. Anecdotally, a man in the tech industry (the same industry I am also a part of) found this out the hard way when he … Discovered Gender Discrimination. Two letters, Mr., made all the difference in whether he was able to find employment. If a woman cannot get an interview, even with a strong resume, it means she is staying at her current, probably lower-paying, position longer, or even staying unemployed longer. Repeat this cycle every two to three years as she tries to climb in her career, and even if she started with higher pay (which would be unusual in most industries), she’s significantly behind in the long run. Slut shaming is real and it’s everywhere. The beauty expectations are just over the top. While there are certainly better places to try to find a partner, if you are in a bar, you’d better be wearing make, because statistically, Wearing Makeup Increases Male Advances At a Bar. Then there are articles like When Men Say They Prefer Women ‘Without Makeup’, They’re Lying, which would have you question your significant other, even if you’ve never had cause to do so before. Needless to say, women’s equality is very important to me. That’s why I strive to cheer on women who are trying to make a difference, such as Anita Sarkeesian of Feminist Frequency. She’s doing some fantastic analysis of the gaming industry and gender discrimination. If you’ve not seen her work, you really should go check it out. On the other hand, we’re not alone in our fight. There are quite a few men who support equality among the sexes, such as John Scalzi, who has a number of articles on the subject.